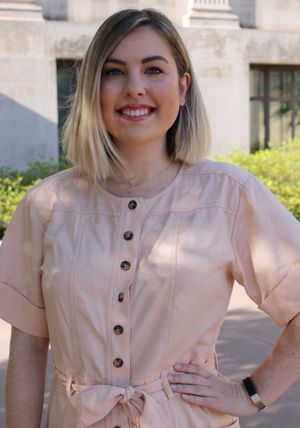 Halsey Musselman is a fifth-generation Oklahoman who began her career at the Oklahoma Hall of Fame in 2019. In her role as the Development Coordinator, she assists the Director of Development in meeting the organization's financial goals and resource development. Halsey also serves as the primary grants manager and is responsible for the management of the Teen Board.

Halsey received both her Bachelor of Arts in Women's and Gender Studies with a minor in African and African American Studies, and a Master of Public Administration with an emphasis in Public Policy from the University of Oklahoma. During her time as a student, Halsey served as a Graduate Teaching Assistant for OU's Political Science Department and held several internships with local nonprofits where developed a passion for investing in Oklahoma students and families. She is wholeheartedly committed to the organization's mission to tell Oklahoma's story through its people by creating the next generation of proud Oklahomans who are going to change the world!

In her free time, Halsey holds several leadership positions on boards across the metro. She serves as the Membership Director for Leaders Impacting the Nonprofit Community in Oklahoma (LINCOK), the I.D.E.A. Chair (Inclusion, Diversity, Equity, Access) for the Association of Fundraising Professionals of Oklahoma, and is a member of the Boys and Girls Club of Oklahoma County's Junior Committee. Halsey also enjoys reading, doing yoga, spending time with her family and dog Liv, trying new foods, and watching Thunder basketball.