Carlos Barboza paints large-scale works of art and is most known for his colorful murals featuring key figures in history and pop culture. Isaac Diaz creates ceramic vessels inspired by history and ancestral connections. This exhibit explores themes of identity and experiences of these Latinx artists. Their works express different histories and cultures that contribute to the diverse population of Oklahoma. Edith Kinney Gaylord: The Twentieth Century Through Her Eyes

Edith Kinney Gaylord was a trailblazer in the field of journalism. While she is most widely known for being a member of the Gaylord publishing family, she made a name for herself as the first woman reporter on staff for The Associated Press in Washington, D.C. From Eleanor Roosevelt, World War II, and the coronation of Queen Elizabeth II, she covered major events and figures of the mid-twentieth century. Gaylord spent much of her wealth philanthropically, supporting women's rights, civil rights, and ethics in journalism. Gaylord embodied a spirit of generosity and curiosity about the world.

This exhibit presents a timeline of Edith Kinney Gaylord's life, focusing on the major events of the mid-twentieth century that she reported. Gaylord's coverage illustrates the immense changes occurring for women in the twentieth century, as they entered into professional fields and leadership roles. As you will learn from the exhibit, Gaylord not only wrote about these changes but embodied them. 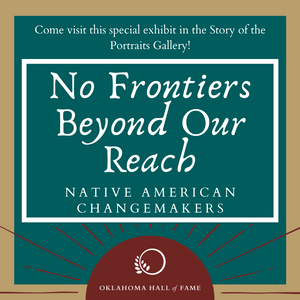 No Frontiers Beyond Our Reach: Native American Changemakers

The Oklahoma Hall of Fame strives to celebrate the diverse cultures that make our state great. The No Frontiers Beyond Our Reach: Native American Changemakers exhibit highlights eight different trailblazing Native Americans that left impactful legacies. The portraits and busts displayed in this exhibit include: Sequoyah, Joseph Clark, Te Ata Fisher, John B. Herrington, Chief Fred Lookout, Willard Stone, Wilma Mankiller, and Lushanya Vinay. These individuals contributed to different fields including history, education, space exploration, military, politics, and performing and visual arts. This exhibit showcases the stories and diverse talents of these tribal citizens of the Cherokee, Chickasaw, and Osage nations to inspire all Oklahomans to make meaningful changes in their community.

For more information about our temporary exhibits or the Museum's Tulsa World | Lorton Family Gallery, contact Emma Leach, at 405.523.3211.