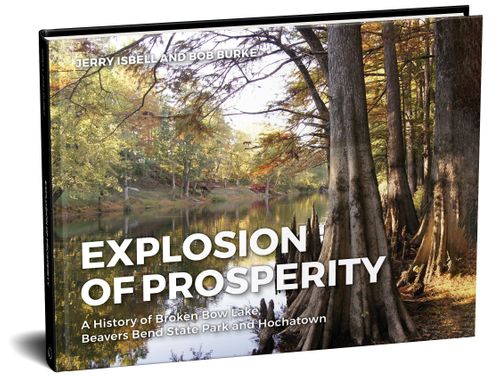 Old Hochatown. Once a sleepy Choctaw Indian village, it became an isolate haven for white settlers in the 20th century. Nearby on the Mountain Fork River, Beavers Bend State Park was built by a government make-work program during the Great Depression and came online as the crown jewel of Oklahoma's state parks in 1936.

Old Hochatown was moved from its location in the Mountain Fork River Valley in the 1960s to make way for Broken Bow Lake. Tourism grew from a small business to an enormous enterprise as people from Oklahoma, Texas, and Arkansas discovered its splendor.

This book captures the bold and exciting history of Beavers Bend State Park and the surrounding area, chronicles the lives of characters who pioneered life in Old Hochatown, and explains and celebrates the phenomenal growth of tourism and accommodations around new Hochatown and Broken Bow Lake. Following the April 19, 1995, bombing of the Alfred P. Murrah Federal Building in downtown Oklahoma City, drawings and notes of sympathy, encouragement, and hope began pouring in from throughout the United States and the world. These expressions of kindness resonate 25 years later. They remind us that there is far greater good in the world than we sometimes see.

The pages of Love Won: The Oklahoma Standard by Cathy and Frank Keating share but a sampling of the thousands of gestures received during the dark days that followed April 19th. It was the outpouring of love from the young that assured Oklahomans that they would survive and their loved ones would never be forgotten. The Oklahoma City National Memorial & Museum: Looking Back. Thinking Forward. is the story of an unexpected journey that began on 9:02 a.m. on April 19, 1995, when a massive bomb ripped apart the Alfred P. Murrah Federal Building in Oklahoma City, taking 168 innocent lives, including 19 children, and changed life as we know it forever. It is a story of a journey of violence turning to hope as the world witnessed a response characterized by an unprecedented melding of courage, compassion, selflessness, and unity, which response became known around the world as the “Oklahoma Standard.” And, it is a story of a journey of a wounded and shocked community that dared to be different in its approach to memorializing the losses suffered, the lessons learned, and the hope that arose from chaos.