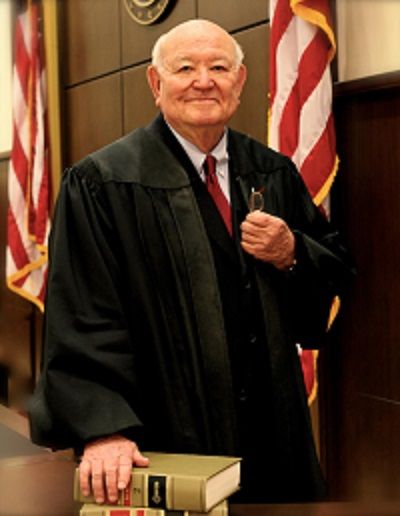 On a fall evening in 1975, Judge West and his wife Mary Ann arrived at the White House to attend their first state dinner hosted by President Gerald and First Lady Betty Ford. They drove themselves, in West's Dodge pickup truck with dog boxes in the bed, through the gates, traveled up the driveway and parked at the West Wing of the White House alongside the sea of limousines. Judge West remarked "It's a long way from Antlers to the White House, even if only for dinner."

"Rumors of my life have been highly exaggerated, to quote the late Christopher Hitchens. After this long, long life I am still trying to learn who I am. But I do know where I am from — Oklahoma — More specifically, I am from Pushmataha County, Clayton and Antlers." - Lee R. West

Born in Clayton and reared in Antlers, following his high school graduation West earned a degree in government from the University of Oklahoma. After 28 months active duty in the United States Marine Corps, including 13 months overseas with the 3rd Marine Division in Japan and the 1st Marine Division in Korea, he returned to the University of Oklahoma where he earned his Doctor of Jurisprudence from the College of Law. He was admitted to the Oklahoma State Bar in 1956. He engaged in private practice until 1961 when he became a member of the faculty at the University of Oklahoma College of Law where he taught torts, damages, evidence, trial practice, and workmen’s compensation. During the 1962-1963 term he was a Ford Foundation Fellow in Law Teaching at Harvard Law School where he received an LLM degree.

In 1963 he returned to private practice and served as Labor Arbitrator for the National Mediation Board. West was appointed by Governor Henry Bellmon to serve as District Judge for the 22nd Judicial District of Oklahoma, serving also as Special Justice of the Oklahoma Supreme Court and Court of Criminal Appeals. He was appointed by President Richard Nixon, and later designated Acting Chairman by President Jimmy Carter, to the Civil Aeronautics Board in Washington, D.C. where he negotiated treaties with 52 countries. West reentered private practice until his appointment to the Federal Bench where he also served as Chief Judge of the Western District of Oklahoma. Since taking senior status in 1994 he has remained active hearing cases at both District and Circuit levels and serving as a settlement judge in complex and protracted cases. An avid outdoorsman, West has served as president of the Grand National Quail Hunt and is known nationwide as a champion breeder and trainer of bird dogs.