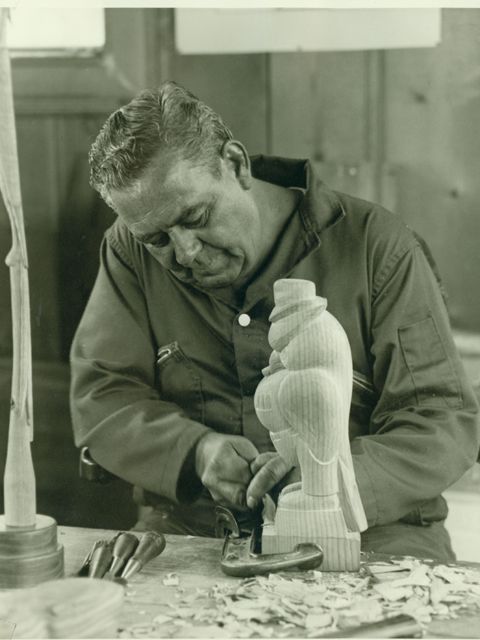 Digging his clay from creek beds and ditches, Willard Stone fashioned figures which he dried in the sun. Eventually, his creations were spotted atop a rural mailbox by Oklahoma historian Grant Foreman, who became Stone’s first patron. Foreman and his wife encouraged the shy boy to enter his work in the county fair, where it won three blue ribbons. Stone recalled Foreman’s praise, word for word: “You show brilliant potential talent. You must get some art education. I will help enroll you at Bacone.”

“We have got to get back to the good earth and the basic things. Our kids have got to believe in nature and know that all of man’s needs come from God and the natural things that surround us.” - Willard Stone

Native Oklahoman Willard Stone was raised by his widowed mother on a sharecropper’s farm. At a very early age, he knew he wanted to be an artist. Drawing and painting were his preferred medium until an accident at the age of 13 lopped off a portion of two fingers and a thumb. In 1936, however, as a result of several years of sculpting with clay, Stone enrolled at Bacone Indian College, recognized internationally for its Indian Art School. Working under two renowned Native American artists, Stone quickly evolved into his style of sculpting wood. Although he gained national recognition while still in college and subsequently received valuable assistance from Thomas Gilcrease and his Institute of American History and Art, for many years he had to support his growing family by working first at odd jobs, then as a pattern maker, and lastly as a die finisher for a Tulsa aircraft firm. In 1961 the demand for his sculptures enabled him to devote full time to his art and Stone’s greatest contribution – one that has never been equaled – was his ability to incorporate the wood grain in his designs.