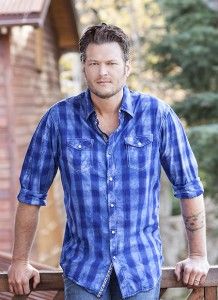 Shelton left for Nashville, Tennessee, just two weeks after his high school graduation at the age of 17.

A Grand Ole Opry member since 2010 and GRAMMY-nominee, Blake Shelton was CMA Awards’ reigning “Male Vocalist of the Year” for the fifth consecutive year in 2014, the 2013 recipient of “Album of the Year” for his platinum release, Based On a True Story..., and a hugely popular coach on the top-rated television music competition show The Voice. Just off the heels of his multi-week No. 1 smash, “Boys ‘Round Here,” the follow-up single, “Mine Would Be You,” topped the charts for three weeks, making it one of the longest-charting country singles of 2013. The third single “Doin’ What She Likes,” made history with the most consecutive No. 1’s on the country charts and his single, “My Eyes,” was Top 20.

Shelton is in a league of his own among contemporary country artists as a top-shelf interpreter of true country music songs. His eleventh studio album,BRINGING BACK THE SUNSHINE, marked a return to showcasing that talent with an album that sonically represents the best that contemporary country has to offer, yet feels like the classic cuts served up by the heroes that inspired Shelton as a young boy growing up in Ada.

Following the 2013 May tornadoes, Shelton organized a star-studded benefit concert, raising more than $6.5 million through the “Healing in the Heartland: Relief Benefit Concert” for the United Way of Central Oklahoma May Tornadoes Relief Fund.

In 2014, thirteen years since his first single, “Austin,” hit the charts, Shelton held 17 No. 1 songs to his credit, breaking his own record for most consecutive No. 1’s on country radio. With 12 singles, including five from his last album alone, Shelton held the record of the most No. 1’s in a row on the country radio charts by any artist.