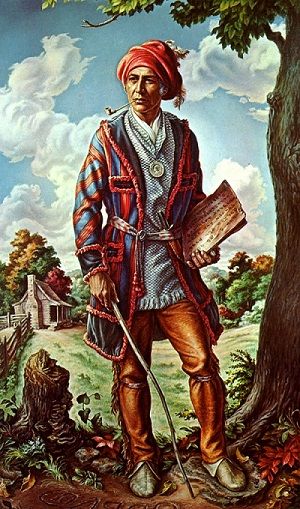 The State of Oklahoma donated a statue of Sequoyah to the National Statuary Hall Collection at the U.S. Capitol in 1917. It is the first statue honoring a Native American to be added to the collection.

“Without Sequoyah’s contribution to literacy and learning the Cherokee Nation would be unrecognizable today. His vision of talking leaves set us on a current path to become one of the most successful, advanced tribal nations in the United States." – Principal Chief Bill John Baker

Sequoyah was born circa 1776 at the village of Tuskeegee, Tennessee. His father was Nathaniel Gist, a Virginia fur trader. His mother was Wut-teh, daughter of a Cherokee Chief.

Although Sequoyah was exposed to the concept of writing early in his life, he never learned the English alphabet. He began to toy with the idea of literacy, “talking leaves”, for the Cherokee people. Unlike the white soldiers, he and the other Cherokees were not able to write letters home, read military orders, or record events as they occurred. After the war, he began in earnest to create a writing system for his fellow Cherokees.

He began by making symbols that could make words. He reduced the thousands of Cherokee thoughts to 85 symbols that represented sounds. He made a game of this new writing system and his daughter was the first that he taught how to make the symbols.

In 1821, after 12 years of working on the new language, he and his daughter introduced his syllabary to the Cherokee people. It was approved by the Tribal Council and within months, thousands of Cherokees became literate. In 1822 Sequoyah visited Cherokees in Arkansas, and in 1828 he moved with them to Oklahoma. He was active in the political life of the tribe, serving as envoy to Washington in 1828 and helping Cherokees displaced from eastern lands.

By 1825 much of the Bible and numerous hymns had been translated into Cherokee. By 1828 they were publishing the Cherokee Phoenix, the first national bi-lingual newspaper, along with religious pamphlets, educational materials, and legal documents.

In recognition of his contributions, The National Cherokee Council awarded Sequoyah a Silver Medal, which he wore the rest of his life, and later an annuity of $300. His statue is one of only two Oklahomans on display in the National Statuary Hall Collection in Washington, D.C. He continued to serve Cherokee people as a statesman and diplomat until his death.