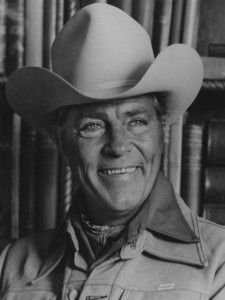 Dale Robertson attended Oklahoma Military College (now Rogers State University) in Claremore, where he was named best all-around athlete. He was also a professional boxer at the time and, in 1939, was offered the starring role in “Golden Boy” but turned it down because he was training polo ponies and felt he was too young to leave home.

Native Oklahoman Dale Robertson and his family moved to Oklahoma City in 1927 where Dale graduated from Classen High School. He received the Purple Heart and Bronze Star medals of the U.S. and the Cross of Lorraine from France during World War II and began his acting career in 1946. He starred or was featured in more than 60 major motion pictures in America, Japan, Italy, England, and Yugoslavia, played in over 400 television shows such as “Wells Fargo”, “Iron Horse,” and “Death Valley Days,” and thrilled audiences at state fairs, rodeos, night clubs, and charitable events around the nation. Discounting the title “retired” beginning in 1967, Robertson managed his Haymaker Farms, a quarterhorse operation, and the Dale Robertson Insurance Company. In 1983, he was inducted into the Hollywood Stuntman’s Hall of Fame and returned to television in 1987 in the starring role on “J.J. Starbuck.”