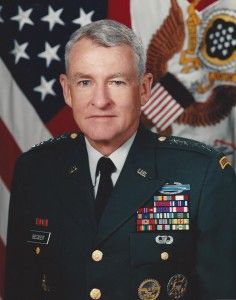 General Reimer was among the first six inductees of the Oklahoma Military Hall of Fame in 1999.

Oklahoma native Dennis J. Reimer graduated from the U.S. Military Academy and served two combat tours in Vietnam. He served in Korea as Chief of Staff, and Combined Field Army and Assistant Chief of Staff for Operations and Training, Republic of Korea/United States Combined Forces Command. Through the years, Gen. Reimer has held various commands as he advanced through the ranks to become the top ranking officer, Chief of Staff, in the U.S. Army in 1995. Previously, he was Commanding General of the U.S. Army Forces Command in Fort McPherson, Georgia. Gen. Reimer has received numerous peacetime and combat services awards including: the Defense Distinguished Service Medal, the Purple Heart, two Legions of Merit, and the Distinguished Flying Cross.