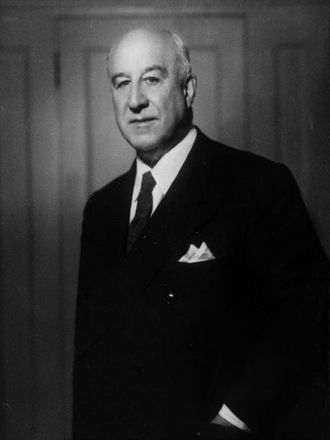 J.G. Puterbaugh was an avid reader and compiled a three-volume set entitled Words of Wisdom, which he typed and published himself while he was president of McAlester Fuel Company.

“It is important to recognize that as between our chosen and wanted goals of success and happiness and duty – duty must always come first…if at any necessary, apparent sacrifice we courageously meet the very demand of duty, the best that destiny has in store for us will come to us.” - Jay G. Puterbaugh

Jay Garfield Puterbaugh was born in Kansas and quit school at the age of 14 to work in the retail coal and material business before returning to high school and graduating in 1894. He returned to the coal business and became a traveling salesman with the Missouri Pacific Coal Company at age 19. He became division sales manager in 1897 and southern sales manager in 1898. He became assistant general sales manager of the company in January of 1902, but resigned only two months later to come to McAlester. In September, 1907 he established The McAlester Fuel Company which marketed and transported coal for the mines in eastern Oklahoma. In 1930 his company also ventured into the oil industry. Always civic-minded, he organized the United Charities to care for the people in need during the 1920 - 1935 era. In 1947 he was an organizer and the first president of the Oklahoma Medical Research Foundation. For all of his life he was a major donor to charities and good causes in McAlester. He was inducted into the Oklahoma Hall of Fame in 1950. Before his death, he funded The Puterbaugh Foundation which today continues to carry out Puterbaugh's philanthropic mission.