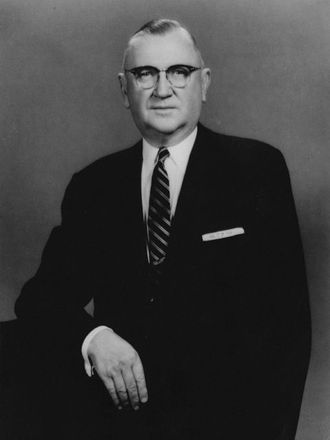 C.I. Pontius received the Oklahoma Governor’s Award for Outstanding Public Service and was appointed as an Oklahoma Colonel, both in 1942, and was Tulsa’s Man of the Year in 1949.

“Freedom, opportunity, righteousness, morality, and faith – these are still the foundations of heritage.” - C. I. Pontius, 1951

Clarence Isaiah “C. I.” Pontius was born in Pennsylvania and attended Mount Hermon Boys School (now Northfield Mount Hermon School) in Massachusetts. He later graduated from Ohio State University before beginning a career in business, which resulted in the organization of several financial companies in Ohio between 1916 and 1930. He moved to Tulsa in 1930 and was active in investment banking until 1935 when, in the midst of the depression, he was appointed president of the University of Tulsa. He served in that capacity until 1958 and the served as chancellor until 1963. He was a member of the original Oklahoma State Coordinating Board for Higher Education and the committee which created the Board of Regents for Higher Education. He was a member of the long-range planning committee, the executive committee, and the Commission on Colleges and Universities of the North Central Association of Colleges and Secondary Schools. Pontius was a leader in the YMCA and served 18 years as director of the Tulsa Chamber of Commerce. He was also vice president of the Oklahoma Industrial College Foundation, served on the Board of the International Petroleum Exposition, and was a member of the board of the Oklahoma Frontiers of Science.