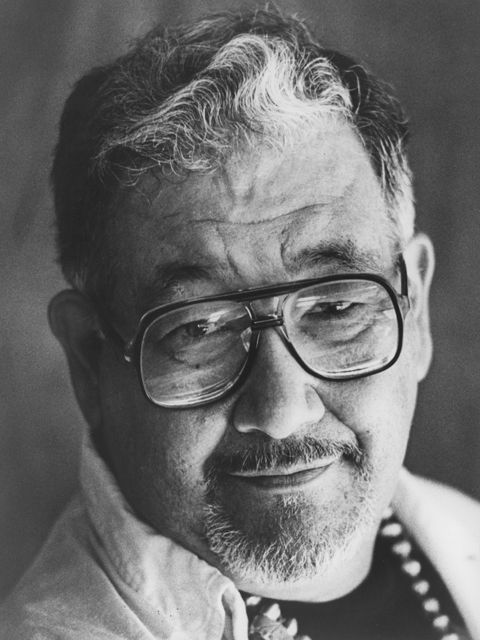 N. Scott Momaday received the Pulitzer Prize for Fiction for his book House Made of Dawn and was named Outstanding Indian of the Year, all in 1969. He was honored as an Oklahoma Treasure in 1999.

“My writing has to do with enduring. Endurance is one of the great capacities of man. My grandmother was a wise and practical woman, above bitterness at last. She confronted change with great equanimity. She lived in a time of great transition, but her world was full of wonder and delight.” - N. Scott Momaday, 1990

Internationally known author, teacher, artist, and Oklahoma native N. Scott Momaday was born to Kiowa artist Alfred M. and writer Natchee Scott and received his academic degrees, including a Ph.D., from the University of New Mexico and Stanford University. He taught English at the University of California, Santa Barbara (1963-1969) and at Berkley (1969-1972). Following a brief period as Visiting Distinguished Professor at New Mexico State University, he became professor of English at the University of Arizona. He has received such honors as the Guggenheim Fellowship (1966), Geographic Society of Chicago Publication Award (1973), the Western Heritage Award (1973), and the Zimmerman Award (1975). He has also served as a Visiting Professor at such schools as the University of Moscow in Russia, Columbia University, and Princeton. Momaday is an accomplished artist and illustrator and was named by Oklahoma Today Magazine as one of the 50 most influential Oklahomans of the 20th Century.