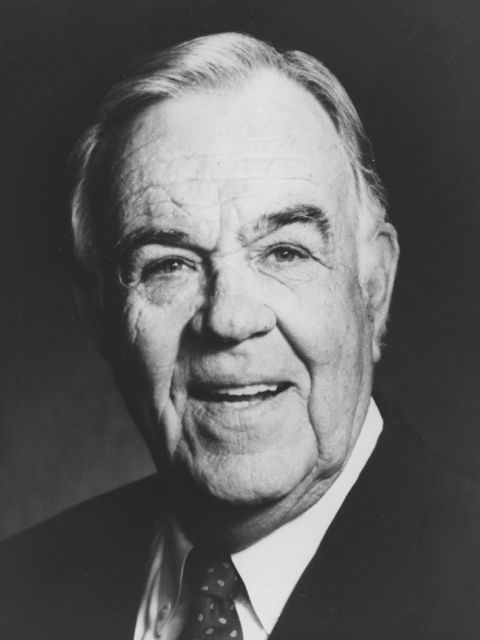 During the Great Depression, Clem McSpadden lived with his parents on the Will Rogers Ranch at Oologah, Oklahoma. He rode a horse to and from school for twelve years, ten miles a day, which is equivalent to riding around the world on horseback to get his education.

“And, Friends, he is, as we say in the horse business, a line bred Oklahoman, Clem McSpadden.” - Wilford Bremley, 1990

Oklahoma native Clem Rogers McSpadden is the grandnephew of Will Rogers, on whose ranch he lived for 12 years of his childhood. He was one of 12 graduates from Oologah High School and attended the University of Redlands. He later received a degree in Naval Science and Tactics from the University of Texas. McSpadden served as a naval officer in World War II and later received degrees from Oklahoma State University in Stillwater. Elected to the State Senate in 1954, McSpadden became the youngest President Pro Tempore and was the first to serve consecutive terms. Elected to the U.S. House of Representatives in 1972, McSpadden was the first Freshman Congressman to serve on the Rules Committee and was instrumental in establishing Rural Caucus and Rural Water Districts in Oklahoma. McSpadden also made an international impact on the world of rodeo as the first to announce a rodeo on horseback using a wireless microphone. Known as “The Golden Voice of Rodeo,” he presented more prestigious rodeo telecasts than any other announcer in his more than 50-year career, including production and management of the National Finals Rodeo for many years. He also produced “World’s Richest Roping,” held annually at his Bushyhead Ranch, to benefit the American Heart Association and Chelsea Charities. His honors include being named Rodeo Man of the Year in 1972, induction into the Cowboy Hall of Fame in 1989 and Professional Cowboy Hall of Fame’s “Rodeo Notables” in 1990. A lay minister, he was a member of the Fellowship of Christian Athletes. He had interests in ranching, real estate, and banking in Oklahoma and managed the Oklahoma Mining and Reclamation Association.