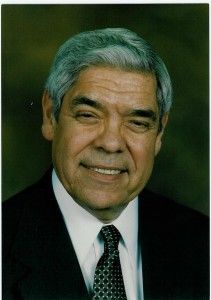 McCaleb and the ODOT traffic engineers discovered and installed the “Briffin barrier,” the first high tension median barrier in the nation, making Oklahoma the vanguard for this new technology which became a nationwide standard and has saved the lives of thousands.

“My heart is full as I receive this coveted recognition and I am glad that I was fortunate enough to be born and raised in this great state.” - Neal McCaleb

Neal McCaleb’s career as a civil engineer spans more than 50 years. Following graduation from Oklahoma City’s Putnam City High School and Oklahoma A & M (now Oklahoma State University), McCaleb became involved in the design and development of the Interstate Highway System. He joined the Oklahoma City Engineering Department, attaining the position of Assistant City Manager, before opening his own consulting engineering firm. It was during this time that McCaleb began building and developing residential subdivisions in the Oklahoma City metropolitan area.

During the administration of Gov. Frank Keating, McCaleb again served as Secretary of Transportation and director of the OTA and ODOT. He presided over the completion of the urban turnpikes and the implementation of the $800 million Highway Capital Improvement Program passed by the Legislature in 1999. Appointed by President George W. Bush in 2001 as Assistant Secretary of the Interior, McCaleb was in charge of the Bureau of Indian Affairs, advocating for the improvement of Tribal Nations through the implementation of tribal sovereignty. Before leaving government service in 2003, the Bureau of Indian Affairs was reorganized to ensure improved trust oversight of assets, both individual and tribal, held by the Department of Interior.

Considering it an honor to serve others, he is the former chairman of the Oklahoma Academy and president of TRUST (Transportation Revenues Used Strictly for Transportation). Others benefiting from his leadership include Oklahomans for Indian Opportunity, President’s Commission on Reservation Economies, and the University of Science and Arts of Oklahoma.