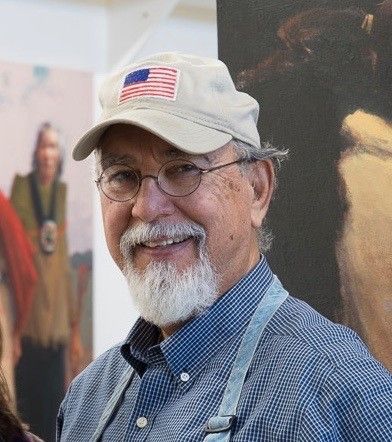 Larsen's painting, "Oh, What a Beautiful Morning" was selected as the image for an United States Postage Stamp honoring Oklahoma's Centennial in 2007.

"I have watched Mike mature as an artist over the years and develop a style and technique that is only his own. His love for the Native American and their place in time comes through in his parentage. He represents everything I think about when I think about art and Oklahoma." - C. Kendric Fergeson

Born of Chickasaw heritage, award-winning artist Mike Larsen grew up in farming communities in Oklahoma and Texas. He is a student of history, immersing himself in the past events of the subjects he paints and sculpts. Larsen knew early on what he wanted to do with his life and for more than 40 years has been recognized as one of the most admired and respected professional fine artists.

Larsen studied traditional art disciplines, beginning his training at Amarillo Junior College, continuing at the University of Houston, and concluding at the prestigious Arts Student League in New York City. His career began at street fairs and rapidly progressed to nationally known festivals. For more than 20 years now, he has been represented by galleries throughout the United States. In addition to teaching art and opening a studio, he co-founded the 23rd Street handcrafts co-op in Oklahoma City. Most of his time today consists of creating paintings and sculpture commissioned by governments, corporations, and individuals.

His love for painting and sculpting dancing figures began when he was commissioned by the State of Oklahoma to paint a 26-foot long mural for the State Capitol Rotunda of Oklahoma’s five Indian prima ballerinas. “Flight of Spirit” was dedicated on November 17, 1991. He has been honored to paint several series of murals for institutions throughout the state of Oklahoma, portraying the history of the state he calls home. Added to his recognition was being chosen by the United States Postal Service to create the Oklahoma Centennial Stamp. In 2017, Larsen’s memoir, Don’t Never Be Afraid of Your Horses was published and his most recent monumental bronze was installed at the Chickasaw Retreat and Conference Center.

Mike and his wife, Martha, live in Perkins, Oklahoma. Their union of nearly 30 years has resulted in the blending of their children – Kate Larsen, Randall Fransen and Jeffrey Fransen.