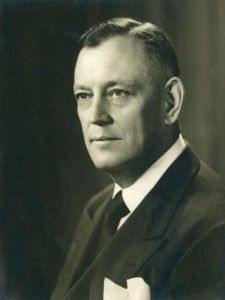 Richard Lane was one of three Protestant civilians to receive the Bene Merenti Medal for Courage in Civilian and Military Affairs from Pope Pius XII.

“Dick was one of Oklahoma’s truly great citizens, and it was a great joy for me to work with him over the years in many things related to the development of our great state.” - Stanley Draper, 1970

Richard Kelvin Lane was born in Wisconsin and graduated from the University of Wisconsin in 1917. He served in the U.S. Army until 1919 when he became assistant operating engineer for Southern Illinois Light and Power Company in St. Louis, Missouri. He was transferred to Ada, Oklahoma’s Southern Power Company in 1920. He became superintendent of the Power Public Service Company and the Southwestern Light and Power Company and was named president upon the merger of the two companies that became Public Service Company in 1927. Lane served as chairman of the board of trustees at Tulsa University, vice president of the Oklahoma State University Development Association, president of Industries for Tulsa Inc., and was a member of the Governor’s Economic Development Commission. He also received a doctor of humanities degree from Tulsa University (1954) and a doctor of laws degree from Harding College in Arkansas (1960).