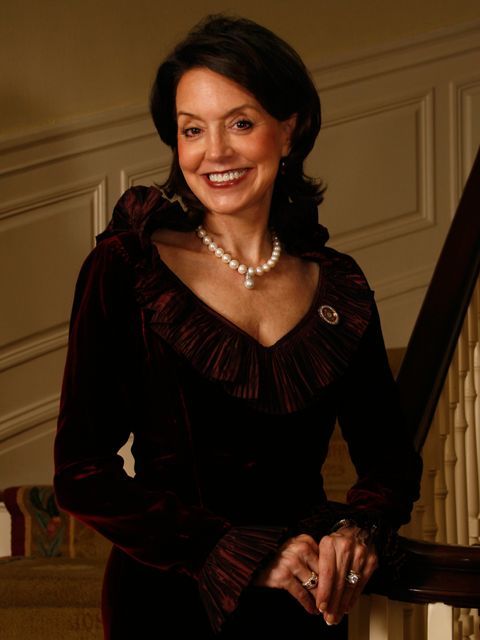 Cathy Keating, as a teenager was crowned "Miss Wool" of Oklahoma, Missouri, and Arkansas by then Lt. Governor George Nigh.

“In our quiet, little sleepy Virginia neighborhood right across the river from Washington, D.C., suddenly this whirlwind, this dynamo came descending on us with Frank in tow. It has never been the same since.” - Sam Donaldson

While First Lady, she planned and organized the International Prayer Service, then authored In Their Name, both on the heels of the Oklahoma City bombing. She has also authored Our Governors Mansions and Ooh La La: Cuisine Presented in a Stately Manner. Additionally, Keating founded Friends of the Oklahoma Governor’s Mansion, Septemberfest, and the Capitol Christmas Tree Lighting ceremony as well as started the tradition of an Oklahoma Christmas tree ornament. She also raised private funds to build the Phillip’s Pavilion on the grounds of the Governor’s Mansion. Moreover, Keating conceived and implemented a grounds management program in partnership with Career Tech for female inmates to teach them a marketable job skill upon their release.

Her previous board commitments range from Habitat for Humanity International Women’s Build to the National Trust. She also co-chaired the Washington, D.C., American Red Cross and the Oklahoma City Salvation Army capital campaigns.

Keating currently served on the National Cowboy and Western Heritage Museum Board, where she co-founded and Chairs the Annie Oakley Society. In that capacity she led the campaign to raise funds and build Liichokoshkomo, a new educational outdoor experience on the museum grounds. In addition, she serves on the boards of the Palomar Family Justice Center, Cristo Rey, the Oklahoma Hall of Fame, and on the National Advisory Boards of the OKC National Memorial and the Oklahoma Medical Research Foundation. She is the American Mother’s National Advisory Chair and continues serving as an Advisory Board member of Friends of the Mansion. A former board member of Express Employment Professionals International, she presently serves as chair of philanthropy.

Keating is the recipient of several awards, including the Salvation Army’s “William Booth” Award, Tom Brokaw’s “People of the Week” honor, and the David and Sybil Yurman Foundation’s “Thoroughbred” Award. She has been inducted into the Oklahoma Hall of Fame and the Tulsa Hall of Fame and has been named an “Outstanding Southerner” in Southern Living magazine.