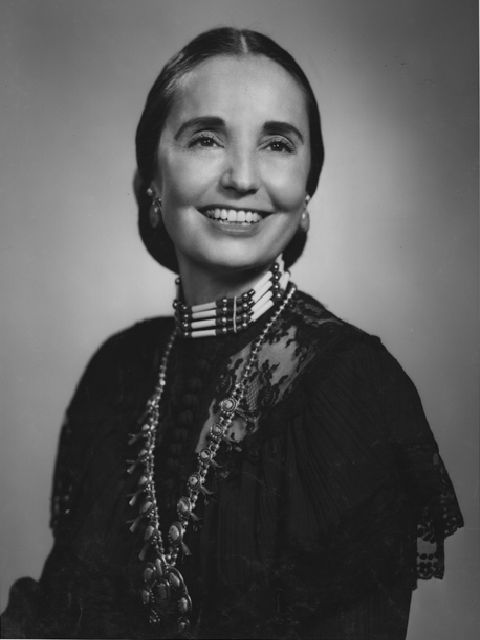 In 1991 Oklahoma artist Mike Larsen immortalized Moscelyne Larkin Jasinski along with four other Oklahoma Native American ballerinas in his 20-foot mural, Flight of Spirit, which hangs in the state capitol rotunda in Oklahoma City.

“I have a dual heritage – Mother was Russian and very excitable, and Daddy was Indian – he could be quiet like still water. Ballet gave me the freedom to express all of that.” - Moscelyne Larkin Jasinski, 1997

The daughter of a young Russian dancer mother and Shawnee-Peoria Indian father, native Oklahoman Moscelyne Larkin Jasinski showed much talent very early in her life and was sent to New York, where she studied under such greats as Mikihail Mordkin, Enzo Celli, and Ludmilla Shollar. At fifteen, she became a member of the original Ballet Russe. While in Buenos Aires she met and married the noted dancer and another member of the Ballet Russe, Roman Jasinski. When the couple returned to America, they joined the Ballet Russe de Monte Carlo, where “Moussia” danced leading roles in such legendary works as The Nutcracker, Rodeo, Swan Lake, and Scheherazade. She was soon regarded as a “walking encyclopedia of dance.” After their son Reuben was born, the family moved to Tulsa in 1954 and established the Tulsa Ballet Theater. Moscelyne was named to the Board of Directors of the National Association of Regional Ballet and the family established a unique blend of education, lectures, and performances across the Southwest.