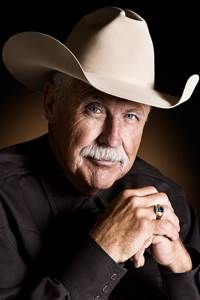 Holden believes an artist should know his subject matter and spends much of his leisure time team roping and staying close to the cowboy way of life.

“Oklahoma has spawned no greater creative genius than that of Harold T. "H" Holden.” - Chuck Schroeder

Harold T. Holden, or “H” as he is called by most folks, was born in Enid. Although the first professional fine artist in the family, he comes from a family of creative and talented inventors and engineers. H graduated from Enid High School, where he played football and ran track before enrolling at Oklahoma State University.

In 1959, while working in Houston, a chance meeting with an instructor at the Texas Academy of Art resulted in H’s enrollment and subsequent art degree. He then began his career in the commercial art field, eventually becoming art director at Horseman Magazine. A completely self-taught sculptor, it was during this time that he began his fine art career at night, painting and sculpting his first love, the West.

After a tour of duty with the Navy during Vietnam, H ventured out on his own as a professional fine artist. Known for his attention to detail and believing an artist should know his subject matter, he spends much of his leisure time staying close to the cowboy way of life.

In 1987, H was chosen to sculpt a series of commemorative bronzes to depict the 165-year history of the Cherokee Strip in Oklahoma and Kansas and completed his first of many monuments, “Boomer” for the City of Enid. “Boomer” later was used on a U. S. Postage Stamp and has become the symbol of the Cherokee Strip. Since that first monument, H has completed 22 additional sculptures, including; “Will Rogers” at the Will Rogers World Airport, “We Will Remember” at Oklahoma State University, and “Headin’ to Market” at the Oklahoma City Stockyards.

Following the diagnosis of a fatal lung disease in early 2010, H closed his studio and got his affairs in order. In July of that same year, he received a lifesaving single lung transplant at the Nazih Zuhdi Transplant Center in Oklahoma City. In gratitude, castings of his 6’ monument “Thank you Lord” grace the garden at Emmanuel Baptist Church in Enid and outside the Emergency Room of the Nazih Zuhdi Transplant Center.

H has received the Lifetime Achievement Award from the Oklahoma Sculpture Society, Governor’s Arts Award, has been inducted into the Mountain Oyster Club as a lifetime member, and was named a Distinguished Alumni by Oklahoma State University.