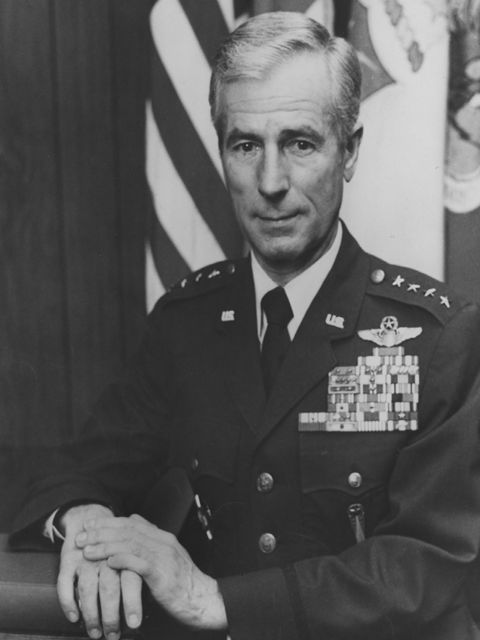 When General James E. Hill retired in 1979 as Commander-in-Chief of the North American Air Defense Command and of the United Air Force Aerospace Defense Command at Peterson Air Force Base, Colorado Springs, he had become the first Oklahoman to achieve the rank of full General in the Air Force while on active duty.

Native Oklahoman James E. Hill attended both Oklahoma State University and the University of Oklahoma before enlisting in the U.S. Army Air Corps as an aviation cadet in 1942. As a P-47 pilot over Europe during World War II, he became an ace, having shot down five enemy aircraft while flying 127 combat missions. He returned to Oklahoma after the war and was instrumental in the organization of the Oklahoma Air National Guard as commander of a P-51 squadron. Then, having made the transition to jet fighters, he flew 128 combat missions during the Korean conflict. During a series of assignments, both in the U.S. and overseas, Gen. Hill graduated from the Royal Air Force Flying College as an exchange officer and in 1964 was assigned to Clair Air Base in the Philippines, where he served as commander of the 405th Fighter Wing. His assignments in later years included Deputy Assistant to the Secretary of Defense for Atomic Energy, Commander-in-Chief Alaskan Command, and Eight Air Force Commander. After his retirement in 1979, he became president of the Colorado Springs Chamber of Commerce. His extensive list of decorations includes four Silver Stars and the Distinguished Service Cross. In 1985, Gen. Hill was inducted into the Oklahoma Aviation Hall of Fame and in 1991, returned to Oklahoma to head a special task force to review the quality of all aviation programs offered in Oklahoma universities.