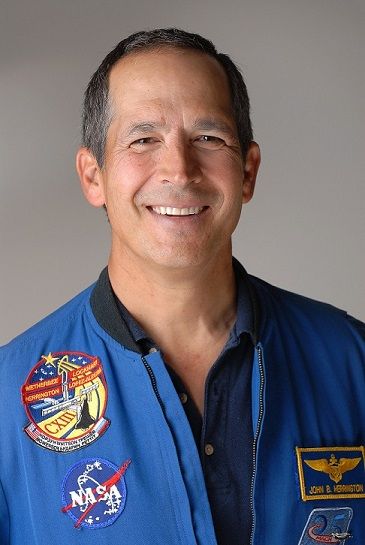 An Oklahoman has served in every phase of the nation's space program Mercury, Gemini, Apollo, Skylab, Shuttle, and the International Space Station.

"When John became an astronaut only 435 humans had ever traveled in space, and only 4 of those people had been born in Oklahoma. When John performed his walk in space, only 41 people had ventured outside the safe confines of the spacecraft and with only a few thin layers of material between them and the vacuum of space where temperatures fluctuate between +250 degrees and -250 degrees. Only one of those explorers descended from Native American ancestry, John Herrington." - Bill Moore, 2019

John Bennett Herrington is a retired United States Naval Aviator, Naval Test Pilot, and NASA astronaut. A native of Wetumka, Oklahoma, he graduated from Plano Senior High School in Plano, Texas, and went on to earn a Bachelor of Science in Applied Mathematics at the University of Colorado at Colorado Springs. He enlisted in the United States Navy, earning a Master of Science in Aeronautical Engineering at the U.S. Naval Postgraduate School, and a place in NASA’s Group 16 Astronaut Class of 1996.

In 2002, Commander Herrington flew on the Space Shuttle Endeavour STS-113, the 112th Shuttle mission, logging more than 330 hours in space and performing 19 hours, 55 minutes of Extra-Vehicular Activity—the 143rd person to walk in space and the first Native American in history.

Since retiring from NASA, his focus has been promoting STEM—science, technology, engineering, and math education and careers, particularly for Native American youth. He undertook RocketTrek, a 4,300-mile cross-country solo bicycle ride from Makah, Washington to Cape Canaveral’s Kennedy Space Center, earned a PhD in education from the University of Idaho, and wrote a children’s book, Mission to Space. He serves as a judge and judge advisor for the FIRST (For Inspiration and Recognition of Science and Technology) Robotics Oklahoma Regional and supports cultural and educational initiatives across the country.

Herrington’s honors include the Legion of Merit, Defense Meritorious Service Medal, NASA Spaceflight Medal, and Navy Commendation Medal. He received the Red Dirt to Rockers Oklahomans in Space Award, the Wiley Post Spirit Award, and has been inducted to the Oklahoma Aviation and Space Hall of Fame and The Chickasaw Hall of Fame. He is the recipient of an honorary Doctorate of Science from the University of Colorado at Colorado Springs and the South Dakota School of Mines and Technology in Rapid City.