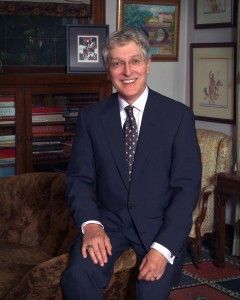 At age 23, while at the University of Oklahoma law school, Henry was elected to the Oklahoma House of Representatives and served from 1975 to 1986.

“The chance for a small-town lawyer from Shawnee, Oklahoma to work closely with such talented judges has just been the most amazing educational experience of my life." - Robert H. Henry

Judge Henry has served in each branch of government. Elected to the Oklahoma Legislature at 23, he chaired the Judiciary and Education Committees, and the Majority Caucus. Elected Attorney General in 1986, he was re-elected in 1990, the first Attorney General in state history to run unopposed. From 1991 to 1994, he was dean and professor of law at the Oklahoma City University School of Law. In 1994, President Bill Clinton appointed him to the six-state U.S. Court of Appeals for the Tenth Circuit. He became the circuit's chief judge in January.

Henry serves on the advisory board for judicial outreach of the American Society of International Law, a position for which Justice Sandra Day O’Connor selected him. He also sits on the board of the VERA Institute of Justice in New York City and is chair of the Middle East/North Africa Council for the American Bar Association. In 2004, Chief Justice William Rehnquist appointed Henry to the U.S. Judicial Conference Committees on Codes of Conduct. In 2005, Chief Justice Rehnquist made Henry chair of the International Judicial Relations Committee. In March 2008, Henry chaired the United States Delegation to the United Arab Emirates World Judicial Forum. From 2010 to 2018, Henry also served as President of Oklahoma City University before retiring to private practice.