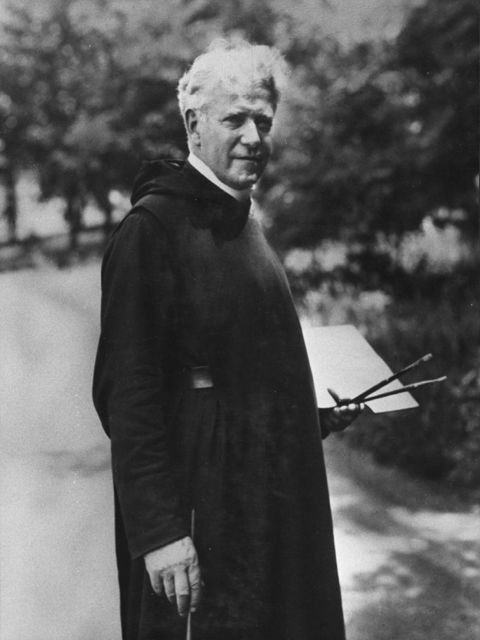 Gregory Gerrer was commissioned to paint the official portrait of Pope Pius X in 1904, which was exhibited at the World’s Fair in St. Louis. He was awarded a bronze medal for his work.

“Let everybody paint as he feels and then you’ll have real painting.” - Father Gregory Gerrer

Painter-priest Father Gregory R. Gerrer was born in Alsace-Lorraine and came with his family to Iowa in 1871. The family moved to El Reno, Oklahoma, around 1889 and Father Gerrer worked in his father’s bakery in town until he traveled to Guthrie, where he met the Superior of Sacred Heart Monastery and was invited to become a candidate for the priesthood. He entered monastic life at Sacred Heart Abbey in Shawnee, was given the name Gregory in 1892 and was ordained in 1900.

Father Gregory then traveled to Italy to study art and earned a reputation for his excellence in portrait painting and the restoration of old masterpieces. He was so successful in his work that many famous works of art were added to his collection and now reside in his Mabee-Gerrer Museum in Shawnee. Gerrer was also the founder and first curator of the Wightman Memorial Art Gallery at the University of Notre Dame.