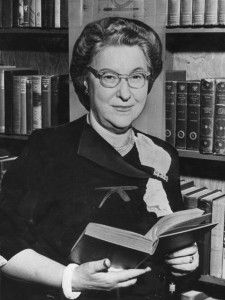 Lucia Ferguson was a charter member of the first college sorority, Kappa Alpha Theta, on the campus of the University of Oklahoma in Norman and at one time boasted one of the most complete libraries in the world on the subject of the southwest and Native Americans.

Lucia Loomis Ferguson, best known to her readers as Mrs. Walter Ferguson, was born at Boggy Depot, Indian Territory, and began writing her famous Tulsa Tribune and Scripps-Howard syndicated column, “Woman’s View,” in 1923. Mrs. Ferguson was educated in a Texas convent and attended Hardin College in Missouri before enrolling at the University of Oklahoma in 1904. She first began her newspaper work in Cherokee, Oklahoma, where she and her husband published the Cherokee Republican. Walter Ferguson served in the Oklahoma Senate from 1916 to 1920, when he sold the newspaper and the couple moved to Oklahoma City. They later moved to Tulsa and, after Walter’s death in 1936, Lucia served as president of the Y.W.C.A. and served on boards including the Urban League, Little Theater, and the Thomas Gilcrease Institute.