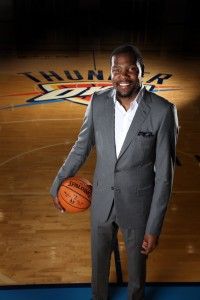 Kevin Durant wants to pursue a career in music when his playing days are over.

"Kevin Durant is the most unpretentious NBA Superstar." - ESPN Sports

A leader on and off the court, Kevin Durant has established himself as a pillar of the Oklahoma community throughout his career with the Oklahoma City Thunder. Durant’s on-court resume speaks for itself and includes six All-Star appearances, four scoring titles, one MVP Award, and a trip to the 2012 NBA Finals.

Durant also has illustrated an impressive civic responsibility during his time in Oklahoma. After tornadoes tore through much of Oklahoma in May, 2013, he donated $1 million to the American Red Cross to aide those impacted by the storms before touring the devastation. His community mindedness is also prevalent throughout the year as he attends multiple Thunder community initiatives, including the team’s Thunder Fit program, Book Bus, and Holiday assist events.

Prior to being selected with the No. 2 pick in the 2007 NBA Draft, the Suitland, Maryland native spent one season at the University of Texas where he was named the Associated Press National Player of the Year. He also became the first freshman in NCAA history to earn the Wooden and Naismith awards.

After winning the NBA’s Rookie of the Year Award in 2008, Durant has helped transform the Thunder into one of the NBA’s most winningest franchises. With Durant helping to lead the way, the Thunder has amassed the second best record in the NBA over the last six seasons (.664 winning percentage).

Through the Kevin Durant Charity Foundation, he is enriching the lives of at-risk youth from low-income backgrounds through educational, athletic, and social programs. Trips abroad also have inspired Durant to connect internationally with the next generation leading the game. Through his foundation and in partnership with NIKE, Inc., the “BUILD IT AND THEY WILL BALL” Courts Renovation Initiative will increase the number of high quality basketball courts accessible to underprivileged youth across the United States and internationally. On October 5, 2015, Durant, alongside students and faculty, celebrated the first court renovation in the United States at Oklahoma City’s North Highland Elementary.