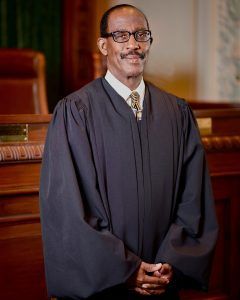 “Whether as a soldier in the army, a Chicago school teacher or an advocate for children, Justice Colbert has always understood the larger mission. The struggle on behalf of those who had little and to make change especially where the law could help realize our American ideals.” – Ken Levit

After graduating from Sapulpa High School, Colbert went on to earn degrees from Eastern Oklahoma State College and Kentucky State University before serving in the United States Army and its Criminal Investigation Division. While at KSU, Colbert was named All-Conference in track and field for the long jump and triple jump and All-American in track and field for the long jump. Following an honorable discharge, he resumed his formal education and earned a masters of education degree at Eastern Kentucky University. He taught middle school students in inner-city Chicago and served as a recreation specialist for a local boys’ club.

Returning home to Oklahoma, he earned his juris doctorate from the University of Oklahoma before accepting the position of Assistant Dean at Marquette University Law School. He served as an Assistant District Attorney for Oklahoma County before entering private practice. During this time he also served as an attorney for the Department of Human Services.