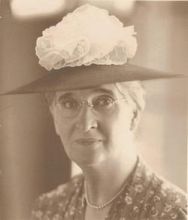 All alone, Ella Classen left Wichita, Kansas, at the age of twenty-one to come to Okahoma. She spent months learning to use her rented typewriter and carried less than one dollar in her purse as she arrived in the state on the day before Thanksgiving in 1890.

“From the first glimpse of the new Oklahoma town to the present time, I have never ceased to love it.” - Ella Lamb Classen, 1942

Ella Lamb Classen was a native of Illinois who often heard her father speak of coming to the Oklahoma Territory as a pioneer. When the family moved to Wichita, Kansas, her father died unexpectedly in 1887. Ella, determined to carry on her father’s dream, and came to Oklahoma in 1890 and went to work for her uncle in the Land Office in Oklahoma City. There she met and ultimately married an already successful young attorney and businessman, Anton H. Classen, in 1902. The couple “expressed their faith in Oklahoma City’s future” by investing in land and developing new living areas for the growing populace. When Mr. Classen died in 1922, Ella became the president of their real estate business, the Classen Company.

Among the innumerable contributions Mrs. Classen made to Oklahoma, she donated some of the city’s most valuable park property and endowed an annual scholarship award for graduates of her namesake, Classen High School.