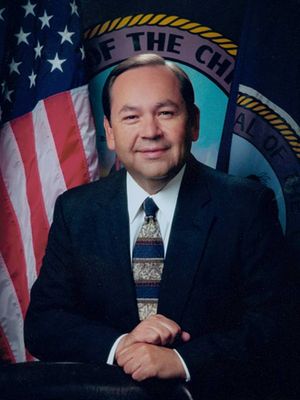 “Bill Anoatubby is a skilled statesman and dedicated public servant committed to the economic emergency of his tribe and the state of Oklahoma.” - Neal A. McCaleb

Bill Anoatubby grew up in Tishomingo where he attended Tishomingo High School, playing on the football team and graduating in 1964. He attended Murray State College and graduated from East Central State College (now East Central University) in 1972 before serving in the Oklahoma Army National Guard. He began working for the Chickasaw Nation as director of tribal health services in 1975, becoming Lieutenant Governor in 1979 and Governor in 1987. Anoatubby has been instrumental in the development of numerous businesses owned and operated by the Chickasaw Nation and under his leadership the tribe was the first to successfully compact for its own health system. Anoatubby became a member and leader of the inter-tribal council of the Five Civilized Tribes since 1978, remaining active in a wide range of organizations including the Oklahoma Indian Affairs Commission, Trail of Tears National Historic Trail Advisory Committee of the U.S. Department of Interior, Leadership Oklahoma, and the Oklahoma Foundation for Excellence. He is also the longtime chairman of the Native American Cultural and Educational Authority.