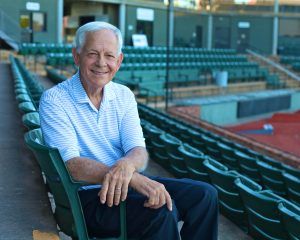 At the age of 70, Allen went to the office at 2 AM to cook pancakes for the employees in the middle of a tightly scheduled day because he knew they needed to stop for a meal and to show his support of their hard work.

“His vision and intelligence was the key to our growth. We are so blessed and fortunate to have Paul Allen in our lives.” - Dave McLaughlin, 2018

Born and raised on the family farm in northeast Nebraska, Paul Allen worked on the farm until leaving for the University of Nebraska. After earning his business degree he was hired by the George A. Hormel Company, working in Fremont, Nebraska, and Austin, Minnesota, before relocating to Oklahoma City in 1967 to manage the Hormel production plant.

Seven years later he and Dave McLauglin co-founded Advance Food Company in Enid, quickly making the community home. The company was sold in 2010 with approximately $800 million in sales and 2400 employees. Today the business is owned by Tyson Foods.

Allen has been inducted to the Enid Hall of Fame and received the Pillar of the Plains Award. He remains in Enid with his wife Joan and has two sons, seven grandchildren, and one great grandchild.