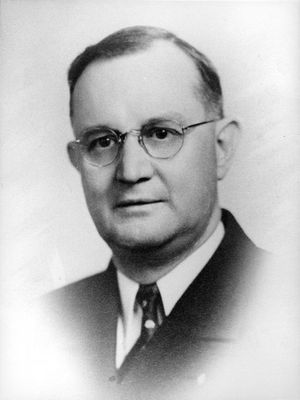 Dr. Adams was credited with developing Eastern State Hospital into the nation’s most recognized institution for the humane and progressive treatment of the mentally ill.

“I can think of no better way in which a man could serve his fellow man than to stand for 40 years as a lighthouse to those tossing upon the tempest sea of life without a rudder.” - James C. Nance, 1953

Felix M. Adams was born and raised in Texas and graduated from Barnes Medical College in St. Louis, Missouri. He was in private medical practice in Big Cabin, Oklahoma (1906-1912), when he was appointed by Governor Lee Cruce to serve as superintendent of the new Eastern State Hospital in Vinita, Oklahoma. Five months after his appointment, Dr. Adams admitted his first patients to the new mental institution, transferring 300 cases from the hospital at Norman.

During all the turmoil surrounding Oklahoma’s mental health program over many years, Dr. Adams was known as an administrator who could work both his field of psychiatry and negotiate with legislators for funds and hospital improvements. More than 21,000 mentally ill were received during Dr. Adams’ tenure. In all, Dr. Adams served 43 years as superintendent of Eastern State Hospital – from its formation until his death.