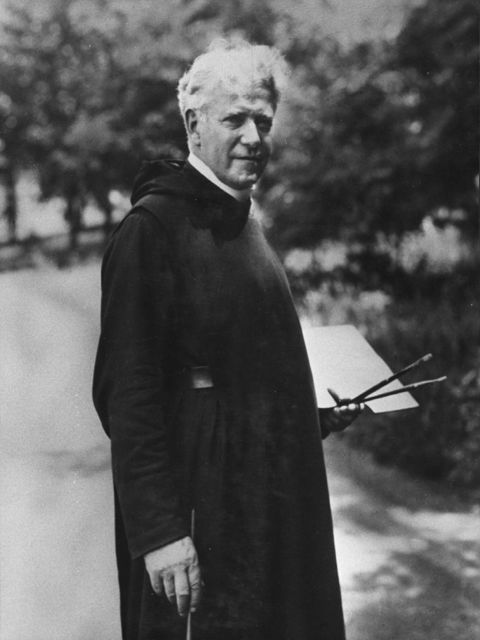 Originally from Alsace-Lorraine, France, Robert Francis Xavier Gerrer and his family immigrated to Iowa in 1897, but by 1889, they had moved to El Reno, Oklahoma. Gerrer worked at his father’s bakery for a few years. One Christmas Day in 1891, Gerrer met Abbot Thomas Duperou of the Benedictine community at Sacred Heart Mission, Oklahoma. He soon after accepted an invitation to join the Mission. After becoming ordained, he was given the name Gregory and began to become recognized for his artistic abilities. So much so that, Pope Pius X selected Fr. Gregory to paint his portrait. As he traveled and painted, he would often collect various items from all over the world. Little did he know that he was starting an entire museum collection. That collection is currently housed at the Mabee-Gerrer Museum in Shawnee, Oklahoma; they even have an actual mummy in their collection.

Supplies! Here are all the materials needed to do today's activities.

Arts & Crafts! Time to get some hands-on with some crafts! Halloween is just around the corner and why not prepare for it! Use the links below to prep for today's activities.

Now, follow along with some of our educators as they put together some activities! Movie Time! It is definitely the SPOOKIEST time of the year! Why not start off by watching a modern Halloween classic: The Haunted Mansion! Storytime! Are you ready to follow along as Little Baby Mummy goes on an adventure to find his Big Mama Mummy! Don’t forget you can also look for this book at your closest public library!

Check This Out! Did you know that there are real mummies at the Mabee-Gerrer Museum of Art in Shawnee, Oklahoma. You can also visit Father Gerrer’s collection while you are there.

Watch This! Why not follow along as Curious George explores Halloween! See as George experiences the dark as well as dress up!

Field Trip! Take some times to enjoy the Fall Weather! There are pumpkin patches all over the state! Why not take a trip to visit one?

Keep learning more of Oklahoma’s Story! We hope you enjoyed learning about Father Gregory Gerrer and get into the Halloween Spirit as well as have fun with our fun spooky crafts! Just goes to show how impactful Oklahomans can be! Be sure to come back next week to learn more about great Oklahomans.