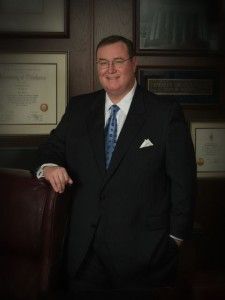 Glen Johnson, Jr., served as Speaker of the House from 1990 to 1996. At the time of his election as Speaker he was the youngest sitting Speaker in the United States.

"I'm a positive person. I'm proud that I don't have to be a flamethrower to get things done. I don't divide - I facilitate and get 'em to the table before I make a call." - Glen Johnson, Jr.

Oklahoma native Glen Johnson, Jr., is former president of Southeastern Oklahoma State University in Durant, and became Chancellor for the Oklahoma State Regents for Higher Education in 2007. He graduated from Muskogee High School in 1972 and received his degrees from the University of Oklahoma (1976) and the OU College of Law (1979) before joining the House of Representatives as a Democrat from Okemah (1982-1996). Significant legislation authored by Johnson included the Drug Free School Zone Bill, the Quality Jobs Bill and the 1992 Higher Education Bond Issue. In 1996, he was appointed director of Public Policy and Adjunct Professor of Law at the University of Oklahoma College of Law. While at the University of Oklahoma, he was a key negotiator in the merger of University Hospital/Presbyterian Hospital/Columbia HCA. While serving a term as chairman of the College and University Council of Presidents in 2005, Glen Johnson, Jr., played a significant role in the successful passage of a $475 million higher education bond issue—the largest capital building program for higher education in the history of Oklahoma. He served on the National Board of Directors of the American Association of State Colleges and Universities, past president of the NCAA Lone Star Conference and a member of the NCAA’s National President’s Council for Division II.