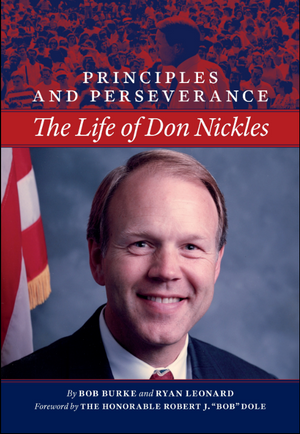 September 24th - Principles and Perseverance: The Life of Don Nickles

Join us for a Beyond the Book discussion with co-authors Bob Burke, Ryan Leonard and Don Nickles. Don Nickles rose higher and wielded more influence in Congress than any other Oklahoma Republican in history. His political career ran for a quarter of a century and took him from the back bench of the Oklahoma State Senate to the No. 2 position in the United States Senate. As the youngest Republican ever elected to the U.S. Senate, Nickles never lost an election and helped turn the Oklahoma Republican Party into the powerful force it is today. His pleasant personality and refusal to make political battles personal helped him win the respect of opponents as he climbed the leadership ladder. Along the way he served as chairman of the National Republican Senate Committee, chairman of the Senate Republican Policy Committee, and finally as Assistant Majority Leader. After his public service, Nickles stayed in the nation’s capital and formed a successful consulting group known as The Nickles Group.

Watch the Beyond the Book Presentation Below