Save the date to celebrate with us the Induction of the Class of 2020 into the Oklahoma Hall of Fame. This virtual event will be broadcast live on Facebook, YouTube, and at www.oklahomahof.com! Learn more about the Class of 2020 here and make sure to set a Facebook reminder here! Register now for Discovery Days! Join educators from the Gaylord-Pickens Museum, home of the Oklahoma Hall of Fame, each Thursday, 10:30 am - 11:30 am, as we virtually learn more about Oklahoma's Story through its People. Discovery Days are family-friendly and recommended for ages 3-7. Register Here for Virtual Free Family Fun! This exhibit visually explores the concepts of contemporary female warriors and a re-emerging matriarchy. On display from October 6 to January 21, 2021. Join us for in-person meet and greet and virtual artist talk here! 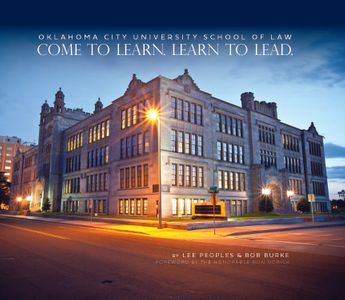 Oklahoma City University School of Law: Come to Learn. Learn to Lead, authored by Lee Peoples and Bob Burke, with a foreword by the Honorable Ron Norick, is a comprehensive look at how the Oklahoma City University School of Law has served as the capital city’s law school and its alumni is a “who’s who” in Oklahoma’s history. Order your copy here today!

This is Oklahoma Podcast

Our podcast partner, This is Oklahoma, helps us tell stories about inspirational Oklahomans from all walks of life-all year long! Join us for a visit with the legendary Dr. George Henderson here! Listen to an episode from Oklahoma Hall of Fame President and CEO Shannon L. Rich here! Check out all of the podcast options and subscribe here! 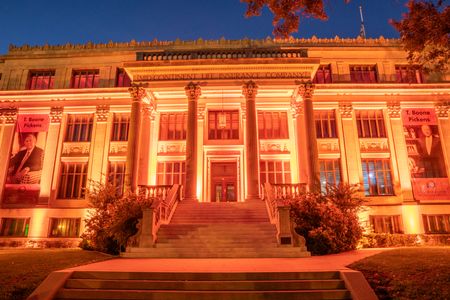 Want to take a Virtual Tour?

Click here to take an interactive tour of the Oklahoma Hall of Fame and Gaylord-Pickens Museum! 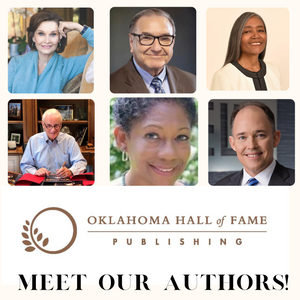 We Tell Oklahoma's Story Though Its People!

As the leader in publishing Oklahoma’s history, the Oklahoma Hall of Fame is proud to have worked with some of Oklahoma’s best, brightest, and creative authors. Check out their profiles here!

Welcome to the Oklahoma Hall of Fame @ Home! During this time of limited interaction here at the Gaylord-Pickens Museum we are telling Oklahoma's story through its people in an expanded digital way! .Check out the daily themed fun here! 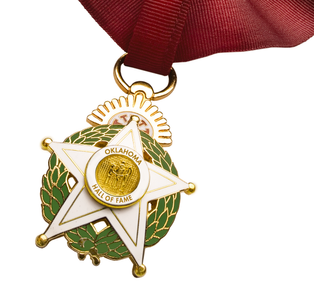 FRIENDS OF THE MEDALLION Beyond the Book - December 17th

Register today for the December 17th edition of Beyond the Book with world-famous Oklahoma author Bob Burke! If you are looking for a unique place to hold the wedding of your dreams? Look no further than the historic Oklahoma Hall of Fame and Gaylord-Pickens Museum! With its beautiful, functional, and tax deductible space spaces, you can design your perfect day. Click HERE to download our Wedding Packet, or email HERE to check date availability!

WHAT PEOPLE ARE SAYING

Both groups had a really good time and have already asked to go back sometime. Thank you and the staff for not only entertaining and educating the kids, but for showing such patience and kindness towards them. We all had a really nice time! This week we're celebrating one of the best college football coaches of all time and an Oklahoma Football legend... Bud Wilkinson! Born in Minnesota, Wilkinson graduated from Shattuck Military Academy in 1933. He received his degree in English from the University of Minnesota Twin Cities in 1937 and a master's degree from Syracuse University in 1940. While at Syracuse, he held the post of assistant, center and quarterback football coach. He also coached golf and ice hockey until he entered the U.S. Navy in 1942. In 1945, he was discharged from the Navy and returned to Minneapolis to enter his father's mortgage and loan business. The following year, he went to The University of Oklahoma as an assistant coach, eventually becoming head coach of the Sooners. Wilkinson led the Sooners to three national championships, 14 Big Seven and Big Eight Conference titles, and six New Year's Day bowl victories. He compiled a record-setting 31 straight victories from 1948-50, and then blew that record out of the water with 47 straight victories in the 1953-57 seasons. Outside of his football career, Wilkinson ran for the U.S. Senate and served four years as the Chairman of the Board of the Lifetime Sports Foundation. President John F. Kennedy appointed Wilkinson as Special Consultant to the President on the fitness of youth. #MemberMonday

Oklahoma Hall of Fame at the Gaylord-Pickens Museum October 19

Born and raised in Tulsa, Ray Siegfried II left his family's insurance business in 1969 and purchased NORDAM from a small, bankrupt company with only eight employees. In less than 10 years, he grew NORDAM to 300 employees and doubled the size of its facilities. He led NORDAM to make more than $11 million in sales. In 2003, he was one of five individuals who received the @nbaaphotos First Century of Flight Award for his significant contributions to the advancement of aviation. ✈️ Since it's #WorldOceanDay, we also need to talk about Siegfried's passion for the ocean, diving and underwater exploration. 🌊🦈 His family sponsored the @okaquarium's Roy and Robin Siegfried Shark Exhibit — a 400,000 gallon shark adventure, which is one of the largest exhibits at the aquarium. Siegfried served as director of the Oklahoma Aquarium Foundation and chairman of the Institute of Nautical Archaeology.